ok, I understand the balancing issue. As long as you know about it and r fine about, its ok to me.

As a regular and mostlikely in the top 3 of the playtime on the server, I dont think its a roulette. Most ppl join if there r more than 40-50 ppl on the server. Even most regulars dont want to play with less than 30 players, if there r other options. The all weapon server is still one of the few of its kind to get full these days, thats true, but in my eyes there is the option for it to be more regular again. Out of the 42 players you showed there, about 15 accounts are JAH accounts which sit and dont play, every regular player knows that…so its actually only about 25 players which leads again to the issue mentioned above. (Great job on these accounts though, these plus the regulars are the core reason why the server still gets started!!!) These are still ok numbers in my opinion so early in the day for bf3, the problem is often after long rounds/ baserape the number of ppl on the server drop down to that range again which kills of the server even during the peek of bf3 players.

My screenshot shows the servers after most of the JAH accounts left: (2 still on at that time)

Like I said its just suggestions…That you took the time and considered the ideas was the main purpose. 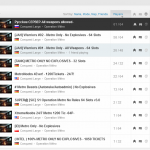 Click here to get a VIP-slot for our servers

Manage Cookie Consent
We, JAH-WARRIORS Multigaming n.e.V (Club seat: Germany), would like to process personal information with external services. This is not necessary for the use of the website, but allows us to interact even more closely with them. If desired, please make a choice:
Manage options Manage services Manage vendors Read more about these purposes
View preferences
{title} {title} {title}